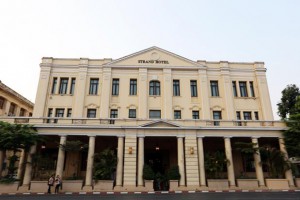 A joint-venture investment by Hong Kong-based Strand Hotels International and the Ministry of Hotels and Tourism, the Strand Hotel, closed from May 1 to renovate for six months and will reopen in November.

According to Olivier Trinquand, vice president of the Strand Hotel and Cruise, the renovation will change the hotel décor to a sophisticated decoration style while preserving its colonial features.

Renovations throughout the hotel will focus on guest rooms, the Strand Signature Restaurant, Café and the Sarkies Bar.

“The hotel has been in operation for more than 114 years and hasn’t been renovated for 23 years. We won’t demolish walls, just refurbish the interior decoration of the hotel,” he added.

The hotel hosted a closing party to celebrate its future and history.

“There’s no better manner to usher in a new era at The Strand hotel, with a toast to the future in the century-old tradition of the Grand dame of Yangon, which will see the city’s top personalities gather for the highlight of Yangon’s social calendar,” Tinquand said.

“The Strand name has been synonymous with luxury hospitality in Southeast Asia since 1901 and these renovations are an exciting new chapter in our history.”

The original construction of the hotel took nine years, from 1892 to 1901 and was created by brothers Aviet and Tigran Sarkies. The duo also built hotels in Singapore and Malaysia. The hotel underwent extensive renovation in 1989, and a second time in 1993, with this undertaking being the third renovation of its existence.

“We won’t change the structure of the building, but we will modify and ‘Myanmar-nise it,’” Operations Manager Mark William Murray-Brown said.

During renovation period, about 140 staff members from the hotel will undergo a refresher course for training as well as language courses and will receive a basic salary during the down time.