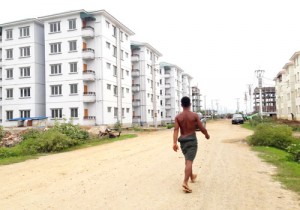 Although the location of the project has not been fixed, it is estimated that it will be implemented on 147.4 acres of farmland at field no (507) of the Yay Kyi village, Patheingyi township. The details of the project have been drawn up and it is now calling for tenders. Once the location is fixed, work can start immediately, he said.

“The main problem is difficulty in obtaining land. We drew up the city project plan which contains more than 10,000 apartments and submitted it to the regional government in April,” he continued.

In April, the regional government formed a group for management and measuring the land areas to implement the project, the group includes the farmland management association and Hluttaw representatives.

Currently, a field study has not been made yet on the estimated land and it can be performed when all the respective members are together, according to the Farmland Management and Statistics Department.

“The apartments will be sold to government staff, pensioners and non-government staff at values fixed by the union. The cheapest apartment will cost around K 9 million. Low-cost housing, affordable housing and high-end housing will be included,” said U Aung Kyaw Oo.

“Government employees submit applications for housing to our department every year. If the housing project is successful, it will solve the housing problems of 20pc of staff in Mandalay,” he went on.

During 2015-2016- budget year, the Department of Urban and Housing Development had constructed 560 apartments which were sold to government staff, pensioners and low income non-government employees.