Rental housing to open in June 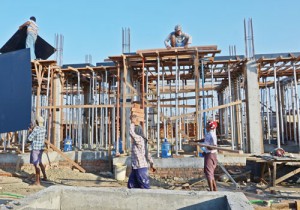 The new apartments are targeted especially at low-income groups and civil servants, with monthly rents of K30,000. Aspiring residents must pay one month of rent in advance, according to DUHD director U Yu Khaing.

More than 35,000 people applied for 1152 rooms in the Mahabandoola rental housing development, and a draw took place at Myanmar Event Park in March.

“Rooms are expected to be ready in early June,” U Yu Khaing told The Myanmar Times on May 9.

“Electrical wiring is still being installed, but water is available now.”

The rental housing, which includes a total of 1200 rooms at 570 square feet each, is located beside No 2 Yangon-Mandalay Road in South Dagon township. The development was implemented by the government along with other companies.

The previous government promised 48 residents that had lived on the land planned for development they could live in the new housing. Therefore only 1152 of the total 1200 spaces were available in the lottery.

Meanwhile, 200 additional lots have been reserved for a wait list since the drawing in case any new tenants are required to leave. People that breach the housing project’s rules and regulations, or don’t pay their bills on time or regularly, shall be evicted in accordance with the law.

“We will continue to manage in accord with prescribed rules and regulations,” U Yu Khaing said.

Built on land 12 acres wide, the Mahabandoola development will include residential rooms and shops. Its relatively low rents and convenient location drew a lot of attention from the public, with thousands of would-be tenants applying.

“I won a lot, so I went to the housing development department to ask about when I am allowed to move to my room,” said rental winner Ko Aung Myo Kyaw. “They told me they haven’t received instructions from the regional government and I didn’t get an exact answer.”

The rental housing was set up under the former government’s plan and was backed by Yangon Region government funding worth K20 billion, allocated by the Union government in the 2015-16 fiscal year.