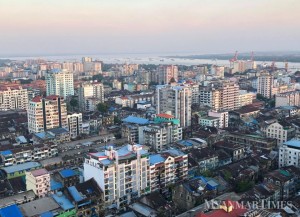 “The list of buildings to be inspected has been drawn up. But details are still being collected, so it hasn’t been announced,” she said.

Buildings will be inspected in Kyauktada, Pabedan, Latha, Lanmadaw and Pazundaung townships, and the findings will be announced to the public, she said.

Quake-resistance of building will be symbolised by three colours: red, yellow and green. Red means it’s a dangerous building that needs urgent repair but doesn’t imply that it will collapse soon and is unsuitable for living, Daw Hnin Ei Win told an earthquake forum on Saturday.

Yellow means a building is slightly dangerous but people can still dwell in it, and green buildings can be considered safe, she said.

“Having a green status doesn’t mean it won’t collapse in a quake. It only means it is more resistant to quakes of ordinary intensity than other buildings,” Daw Hnin Ei Win said.

The results of the survey made will be made public only after being reviewed by members of the Myanmar Earthquake Committee. The assessments rely on on-site inspections, but more detailed studies are needed for more accurate results, she said.

The laws and regulations only apply to new construction projects, and there are none for existing buildings.

In Yangon, the number of old buildings exceeds new ones, according to the survey.

After the Myanmar Earthquake Committee studies the findings, the systematic maintenance of old buildings in Yangon will be carried out with technical assistance from the World Bank, Daw Hnin Ei Win said.

The survey is focussing on those five townships because they are densely populated and have tall buildings that are more likely to suffer severe damage in a strong quake.

After the survey, which started two years ago in the five downtown townships, building assessment will be conducted in other vulnerable townships.